"Information retrieval is the task of searching a body of information for objects that statisfied an information need."

This course is offered at the Faculty of Mathematics and Physics to graduate students interested in the area of information retrieval, web search, document classification, and other related areas. It is based on the book Introduction to Information Retrieval by Christopher D. Manning, Prabhakar Raghavan, Hinrich Schütze. The course covers both the foundations of information retrieval and some more advanced topics.

Language: The course is taught in English. All the materials are in English, the homework assignments and/or exam can be completed in English or Czech.

No formal prerequisities are required. Students should have a substantial programming experience and be familar with basic algorithms, data structures, and statistical/probabilistic concepts.

To pass the course, students need to complete two homework assignments and a written test. See grading for more details.

Note: The slides available on this page might get updated during the semestr. For each lecture, any updates will be published before the lecture starts.

Draw the postings for terms rise and home that would be built for the following document collection:

Query optimization is the process of selecting how to organize the work of answering a query so that the least total amount of work needs to be done by the system. Recommend a query processing order for the following two queries:

For a conjunctive query, is processing postings lists in order of size guaranteed to be optimal?
Explain why it is, or give an example where it isn’t.

Write out a postings merge algorithm for the query:

How should the following Boolean query be handled?

x AND NOT y

Why is naive evaluation of this query normally very expensive?
Write out a postings merge algorithm that evaluates this query efficiently.

Are the following statements true or false?

The following pairs of words are stemmed to the same form by the Porter stemmer. Which pairs would you argue shouldn’t be conflated. Give your reasoning.

Assume a biword index. Give an example of a document which will be returned for a query of New York University but is actually a false positive which should not be returned.

How could an IR system combine use of a positional index and use of stop words? What is the potential problem, and how could it be handled?

Write down the entries in the permuterm index dictionary that are generated by the term mama.

If you wanted to search for s*ng in a permuterm wildcard index, what key(s) would one do the lookup on?

Vocabulary terms in the postings of in a k-gram index are lexicographically ordered. Why is this ordering useful?

If |a| denotes the length of string a, show that the edit distance between a and b is never more than max{|a|, |b|}.

Compute the edit distance between paris and alice. Write down the 5 × 5 array of distances between all prefixes as computed by the Levenshtein algorithm.

Consider the four-term query catched in the rye and suppose that each of the query terms has five alternative terms suggested by isolated-term correction. How many possible corrected phrases must we consider if we do not trim the space of corrected phrases, but instead try all six variants for each of the terms?

An auxiliary index can impair the quality of collection statistics. An example is the term weighting method idf, which is defined as log(N/dfi) where N is the total number of documents and dfi is the number of documents that term i occurs in. Show that even a small auxiliary index can cause significant error in idf when it is computed on the main index only. Consider a rare term that suddenly occurs frequently (e.g., Flossie as in Tropical Storm Flossie).

Assuming one machine word per posting, what is the size of the uncompressed (nonpositional) index for different tokenizations based on Slide 48? How do these numbers compare with numbers on Slide 71?

Estimate the space usage of the Reuters-RCV1 dictionary with blocks of size k = 8 and k = 16 in blocked dictionary storage.

What is the idf of a term that occurs in every document? Compare this with the use of stop word lists.

Consider the table of term frequencies for 3 documents denoted Doc1, Doc2, Doc3 (bellow) and compute the tf-idf weights for the terms car, auto, insurance, best, for each document, using the idf values in the following table:

Can the tf-idf weight of a term in a document exceed 1?

If we were to stem jealous and jealousy to a common stem before setting up the vector space, detail how the definitions of tf and idf should be modified.

Recall the tf-idf weights computed in Exercise 4.2. Compute the Euclidean normalized document vectors for each of the documents, where each vector has four components, one for each of the four terms.

Verify that the sum of the squares of the components of each of the document vectors in Exercise 4.6 is 1 (to within rounding error). Why is this the case?

With term weights as computed in Exercise 4.6, rank the three documents by computed score for the query car insurance, for each of the following cases of term weighting in the query:

Show that if a query vector and document vectors are all normalized to unit vectors, then the rank ordering produced by Euclidean distance is identical to that produced by cosine similarities.

In turning a query into a unit vector we can assigned equal weights to each of the query terms. What other principled approaches are plausible?

Derive the equivalence between the two formulas for F measure on slide 51 (using α ad β as parameters), given that α = 1/(β2 + 1).

Must there always be a break-even point between precision and recall? Either show there must be or give a counter-example.

What is the relationship between the value of F1 and the break-even point?

In Rocchio’s 1971 algorithm (SMART), what weight setting for α/β/γ does a “Find pages like this one” search correspond to?

Give three reasons why relevance feedback has been little used in web search.

Why is positive feedback likely to be more useful than negative feedback to an IR system? Why might only using one nonrelevant document be more effective than using several?

What are the differences between standard vector space tf-idf weighting and the BIM probabilistic retrieval model (in the case where no document relevance information is available)?

Let Xt be a random variable indicating whether the term t appears in a document. Suppose we have |R| relevant documents in the document collection and that Xt = 1 in s of the documents. Take the observed data to be just these observations of Xt for each document in R. Show that the MLE for the parameter pt = P(Xt = 1|R = 1,q), that is, the value for pt which maximizes the probability of the observed data, is pt = s/|R|.

Including STOP probabilities in the calculation, what will the sum of the probability estimates of all strings in the language of length 1 be? Assume that you generate a word and then decide whether to stop or not (i.e., the null string is not part of the language).

Consider making a language model from the following training text:

the martian has landed on the latin pop sensation ricky martin

Suppose we have a collection that consists of the 4 documents given in the below table.


Build a query likelihood language model for this document collection. Assume a mixture model between the documents and the collection, with both weighted at 0.5. Maximum likelihood estimation (MLE) is used to estimate both as unigram models. Work out the model probabilities of the queries click, shears, and hence click shears for each document, and use those probabilities to rank the documents returned by each query. Fill in these probabilities in the below table:


What is the final ranking of the documents for the query click shears?

The rationale for the positional independence assumption is that there is no useful information in the fact that a term occurs in position k of a document. Find exceptions. Consider formulaic documents with a fixed document structure.

Prove that the number of linear separators of two classes is either infinite or zero. 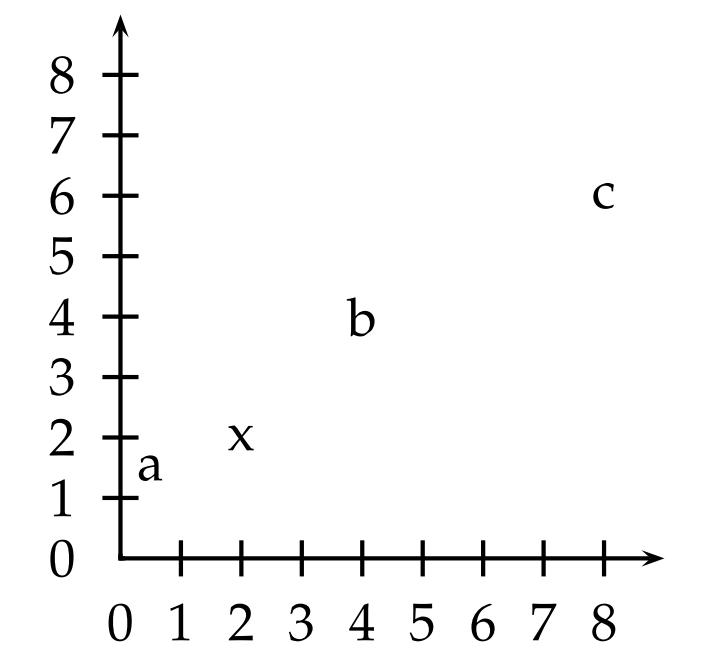 What is the minimum number of support vectors that there can be for a data set (which contains instances of each class)?

Define two documents as similar if they have at least two proper names like Clinton or Sarkozy in common. Give an example of an information need and two documents, for which the cluster hypothesis does not hold for this notion of similarity.

Make up a simple one-dimensional example (i.e. points on a line) with two clusters where the inexactness of cluster-based retrieval shows up. In your example, retrieving clusters close to the query should do worse than direct nearest neighbor search.

Replace every point d with two identical copies of d in the same class in the above figure.

Why are documents that do not use the same term for the concept car likely to end up in the same cluster in K-means clustering?

Two of the possible termination conditions for K-means were (1) assignment does not change, (2) centroids do not change. Do these two conditions imply each other?

For a fixed set of N documents there are up to N2 distinct similarities between clusters in single-link and complete-link clustering. How many distinct cluster similarities are there in GAAC and centroid clustering?

Consider running 2-means clustering on a collection with documents from two different languages. What result would you expect? Would you expect the same result when running an HAC algorithm?

Why is it better to partition hosts (rather than individual URLs) between the nodes of a distributed crawl system?

Why should the host splitter precede the Duplicate URL Eliminator?