The basic principles of the Functional Generative Description (FGD) were formulated at the beginning of the 60’s of the 20th century by Petr Sgall and have been gradually developed by his students and followers (Sgall, 1967a, Sgall et al., 1969, Hajičová, 1975, Sgall et al., 1980, Panevová, 1980, Sgall et al., 1986, etc.). From the linguistic point of view, FGD is based on the tenets of the functionally oriented Prague School of Linguistics. From the formal point of view, it represents a dependency-based generative description, an original alternative to the Chomskyan transformational grammar. The distinctive features of FGD can be formulated as follows:

The original formulation of FGD stipulates the following layers:

On the three lower layers, the sentence is described in a form of a string, whereas on the two syntactic layers, it is represented as a dependency tree, with the verb as the root of the tree. 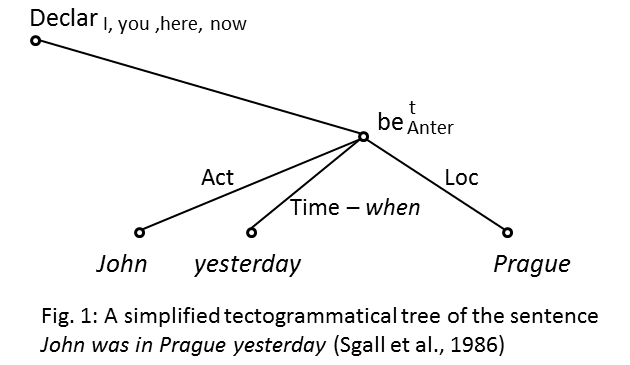 The tectogrammatical representation is described in a form of a dependency tree, where individual nodes represent the meaning units of the sentence (containing their lexical and (deep) morphological information) and edges stand for (deep) syntactic relations between the relevant nodes (Petkevič, 1995, Sgall et al., 1986).

In addition to the “vertical dimension” of the dependency tree, which  captures the relations between a head (governor) and its modifiers (dependents), the “horizontal dimension” – i.e., the order of the nodes from left to right – represents the deep word order which accounts for the information structure of the sentence, i.e., its topic-focus articulation (TFA).