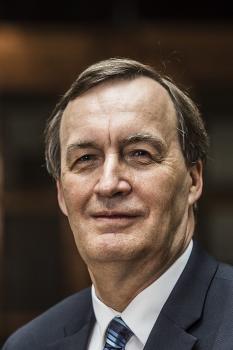 My current CV in English with a list of selected publications.

2021/09/30 The detailed evaluation report from the Research Infrastructure evaluation 2021 is in. The LINDAT/CLARIAH-CZ research infrastructure, which I lead, has done very well - virtually securing continuation after 2022. We have got the highest mark overall, and from the 13 detailed criteria, only two are graded at the second highest mark, and the rest is "Excellent". Thanks go to all the teams at all the institutions taking part in this complex, cooperative project!

2021/02/24 The Institute has signed, through the CUIP (Charles University Innovations Prague Ltd., Charles-University-fully-owned IPR and Tech Transfer company), its first "microlicence" for commercial use of its highly acclaimed and accurate CUBBITT Machine Translation service. The service, developed by my colleagues at UFAL, is being run as part of the LINDAT/CLARIAH-CZ Research Infrastructure, I have been working with CUIP on previous contracts as well; now we have a simple, one-page licence agreement for almost instant possibility to commercially use of all the LINDAT/CLARIAH-CZ run services and hope to close a host of such contracts in the near future..

2021/02/01 A "European Language Equality" project, funded by the EP and EC, has started. I am involved as the Co-PI, leading the Charles University group, which is one of the six core partners of the project. I also lead Workpackage 2 which should prepare a host of users', developers' and other stakeholdrs' surveys, in order to get wide support and relevant information for creating the Horizon Europe-aimed Strategic Research Agenda in Digital Language Equality by 2030.

2021/01/01 A "microproject" within the Humane-AI-Net H2020 AI Center of Excellence project started, between my group and a group at DFKI Berlin. We will enrich the SynSemClass event ontology with selected German verbs, creating multilingual synonym classes now for three languages (Czech, English and German).

2020/12/19 A number of new and/or massively curated datasets will be released in the coming days and weeks through the LINDAT/CLARIAH-CZ repository and the related services, both richly annotated corpora such as the 4M PDT-C and the associated morphological and valency lexicons. The related heavily interdependent projects, which I had the opportunity to personally lead, lasted for about three years, and involved over 20 colleagues and studentd annotators.

2020/10/01 The Humane-AI-Net Call 48 "AI Centre of Excellence" H2020 project, in which I have been substantially involved during its preparation and which I lead as a Co-PI for the Czech partner Charles University, has officially started! We will strive to get involved in as many "microprojects", advancing the SoA in NLP and AI, as possible.

2020/09/01 The Evaluation 2021 process for Research Infrastructures begins. LINDAT/CLARIAH-CZ will do its best to succeed and expand its coverage to oral history and the study of the Holocaust, by adding the EHRI CZ partners. The Evaluation report shall be submitted by December; success will mean the possibility to apply for extension of funding beyond 2022.

2020/06/20 The Center for Visual History Malach, as an integral part of UFAL and LINDAT/CLARIAH-CZ, will continue with one more co-coordinator with focus on the Balakns. This all despite the fact that CVHM is losing central supprot form the University - LINDAT/CLARIAH-CZ will help, as well as new grants and externally funded projects, and in fact. further expansion of CVHM activities is being planned.

2020/04/09 The web page of ICCL (International Committee for Computational Linguistics, the body that organizes Coling conferences since 1960s) is now fully hosted at UFAL (take over from Univ. of Sheffiled - big thanks for having it there for so long!), with a list and an archive of past Coling conferences, all current and former members, and permanent call for hosting future Colings. Just in time for Coling 2020, even though it wil move to December and become partly or fully virtual.

2020/01/27 LINDAT/CLARIAH-CZ and UFAL kicked off a continuation of the Mellon Foundation project, led by James Pustejovsky at Brandeis University, Waltham, MA. Highlight of the kickoff meeting visit: visit to the WGBH Archives in Boston.

2020/01/01 LINDAT/CLARIAH-CZ project continues as a merged project of the former LINDAT/CLARIN, adding new 2 equipment grant has started and soon the infrastructure will be extended by new computers and software. Also the LUSyD project formally started.

2019/11/10 I have been awarded the LUSyD project (Language Understanding: from Syntax to Discourse) within the EXPRO program of the Grant Agency of the Czech Republic, to run 2020-2024. We will tackle challenging problems in Computational Linguistics - namely, hoe to represent knowledge in relation to semantic representation of texts, and whether it can be learned by state-of-the-art machine learning approaches.

2019/07/01 I am leaving for the U.S. this summer to teach a Multilingual Natural Language Processing (full summer semester) course (Masters/graduate level) at the University fo Colorado in Boulder, Computer Science Department (CS 7800). I am excited to take up this (re)new(ed) challenge of teaching in the U.S.!

2019/01/01 LINDAT/CLARIAH-CZ project has started, for the DARIAH CZ partners. LINDAT/CLARIN still continues until the end of 2019, when both projects merge.

2019/01/01 All the four UFAL H2020 projects have started - from the infrastructural SSHOC and ELG through Bergamot to he ELITR automatic interpretation proejct (by O. Bojar).

2018/07/01 UFAL has been awarded four H2020 grants in the H2020 Call 29 and INFRA Call. Two are Ondrej Bojar's (ELITR, which he coordinates, and Bergamot, coordinated by Edinburgh), and two mine: SSHOC (INFRA project for SSH cooperation in Research Infrastructures) and European Language Grid - platform for Language Technology marketplace, coordinated by DFKI Berlin.

2017/09/15 Our proposal for DARIAH CZ infrastructure has passed 2st round of evaluation succesfully, with the second highest mark possible, only with a request to reduce budget. Funding will start after the next government's budget approval in 2019 or 2020 - jointly with LINDAT/CLARIN, which obtained the highest possible evaluation grade by the international evaluation board. Thanks to all members of the LINDAT/CLARIN team for this achievement!

2017/06/20 The Structural Funds project to improve LINDAT/CLARIN infrastructure has finally been signed, for 2017-2019. It will allow to expand our computing and data storage capabilities, as well as to fund some infrastructural research.

2017/04/01 Our proposal for DARIAH CZ infrastructure has passed 1st round of evaluation succesfully. We are now working with our 9 partner institutions on a full proposal for the 2nd round.

2017/04/01 Two new NAKI II projects have started, one of which I coordinate (VIADAT). We also particiapte on another project coordinated by our colleagues at the University of West Bohemia, with the Institute for the Study of totalitarian Regimes.

2016/03/01 I have started my Adjunct Professor position at the University of Colorado in Boulder, Department of Computer Science, working with Martha Palmer and others on Computational Linguistics, NLP and new multilingual language resources.

2016/01/01 Second phase of the LINDAT/CLARIN Research Infrastructure has started, of which I mamthe PI. It has been reduced by the government decision of 2015/12/21 in budget and time, but it will allow us to continue our work on language resources and service.

My research interest evolved from morphology and tagging of inflective languages (lexicons, analysis and generation tools - now reimplemented by Milan Straka as MorphoDiTa) to machine translation (French-English while at IBM and Czech-English; also, Czech-Russian and other closely related languages). I am also interested in parsing (see e.g. the CLSP Workshop on parsing Czech) and generation. However, in the past 10 years, I devoted most of my research time to creating linguistic resources, such as the Prague Dependency Treebank family of projects (Czech, English, Arabic) and managing new research projects, mainly funded by the EU (see below for a complete list). I am also involved in the Universal Dependencies project, led by Joakim Nivre of Uppsala University and hosted by LINDAT/CLARIAH-CZ as the official UD repository. My management responsibilities include the LINDAT/CLARIAH-CZ Research Infrastructure and also being the Deputy Chair of the Institute.

I am also interested in spoken language understanding. I participated in the now finishing project Malach, both on the language modeling part (for ASR), on thesaurus translation and on the IR Czech test collection.

I closely work not only with my students, but also with other Czech and foreign teams, such as the University or West Bohemia in the Czech Republic, Center for Speech and Language Processing at the JHU, the CLEAR lab at CU Boulder, Linguistic Data Consortium, the European Language Resources Association (ELRA/ELDA), and several European Universities on EU projects (see below).

I am or have been the PI, or the national PI of several major Czech, EU and NSF (US) research projects. The list of current projects (or of those finished within the last 10 years) is below.

Before that, I have been the PI or Co-PI of many other projects, such as the Czech Grant-Agency supported highly collaborative, nation-wide Czech National Corpus project (2003-2006), of several collaborative grants for mutual visits to/from U.S. institutions (Johns Hopkins University, University of Pennsylvania, Univ. of Colorado), and of several smaller subcontracting grants (such as the U.S.-based GALE project). In the 90s, I have been the Czech PI of several collaborative EU projects specifically aimed at the formerly Soviet Bloc Countries (EU project STEEL, EU project CEGLEX).

I have been working on some other grants as a researcher as well, such as the predecessor Center for Computational Linguistics (2000-2004), the Laboratory for Linguistic Data (1996-2000), Czech-English MT project supported by the Czech Grant Agency MATRACE (1993-1995), and many smaller projects.

Several industrial projects have got my attention as well, such as the Czech Grammar Checker project and certain lexicon(s) for Microsoft, morphological databases for companies like IBM, Xerox, Lotus, Morphologic, Zi Corp., Lernout & Hauspie, and cooperation on product development for several Czech companies, such as ASPI (legal information system using NL search), Oracle (the Oracle Context product) and morphological dictionary development for the Czech and Slovak portals centrum.cz and centrum.sk. I now contiune to be engaged in negotiations with national as well as international companies regarding licensing of lagnauge resources and/or providing services, such as secure machine translation and others.

Some pre-2000 publications can be missing from the above system. For a complete list of my publications published before 2008 please see this PDF.

I am now teaching an adapted version of the "Introduction to (statistical) NLP" course which I developed while at JHU. The current course is divided into two parts: NPFL067 and NPFL068. Please see also my Hopkins' archive web pages for more information and the complete set of foils in html form.

I have also served as a reviewer at additional 43 conferences or workshops (between 1994 and 2013).

I am member of the ACL, ISCA, ACM, IEEE, Czech Cybernetics Society and the Prague Linguistic Circle

You might want to visit my previous page(s) and teaching pages at http://www.cs.jhu.edu/~hajic.

You might also want to visit our Institute's pages at http://ufal.mff.cuni.cz

A little personal project wrt the COVID-19 pandemic (in Czech only): http://ufallab.ms.mff.cuni.cz/~hajic/covid-stats-current.php